Leaving temperatures in excess of forty degrees to be used, not in an airborne operation, but as a fire brigade, plugging gaps in the line around Leningrad, particularly along the banks of the River Neva. They were Army Group North’s strategic reserve.  They were quickly placed into the fray, fighting along the River Neva, where temperatures dropped to below -30 degrees, sometimes as low as -40. They were successful at plugging the gaps and preventing the Soviet Union from exploiting their bridgeheads over the River Neva, but at a price. Some units suffered up to 75% casualties. Many who had survived the assault on the Fortress Eben Emael, (Devils with Wings) and the fierce fighting on the Island of Crete (Devils with Wings: Silk Drop) met their fate in this bitter struggle with the atrocious weather and the never ending Soviet hordes.

These next few posts will fill in some of the background to these amazing airborne soldiers. Their training was particularly tough, and they were the first parachute, airborne, division in existence. After a tough physical regime, consisting of strenuous exercise, unarmed combat, weapons handling and long forced marches, culminating in bigger and bigger unit exercises, they complete their parachute training. Before they were allowed anywhere near a parachute, they to jump into a tank of water from a 45 foot tower. Their training, apart from the parachute element, was thought to be similar to that of the British WW2 Commandos. 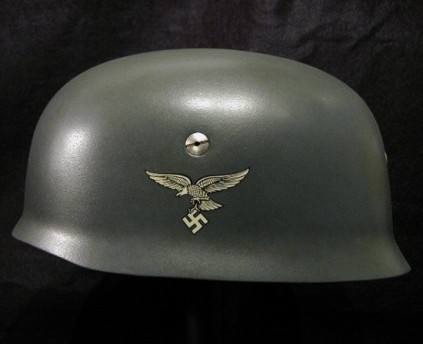 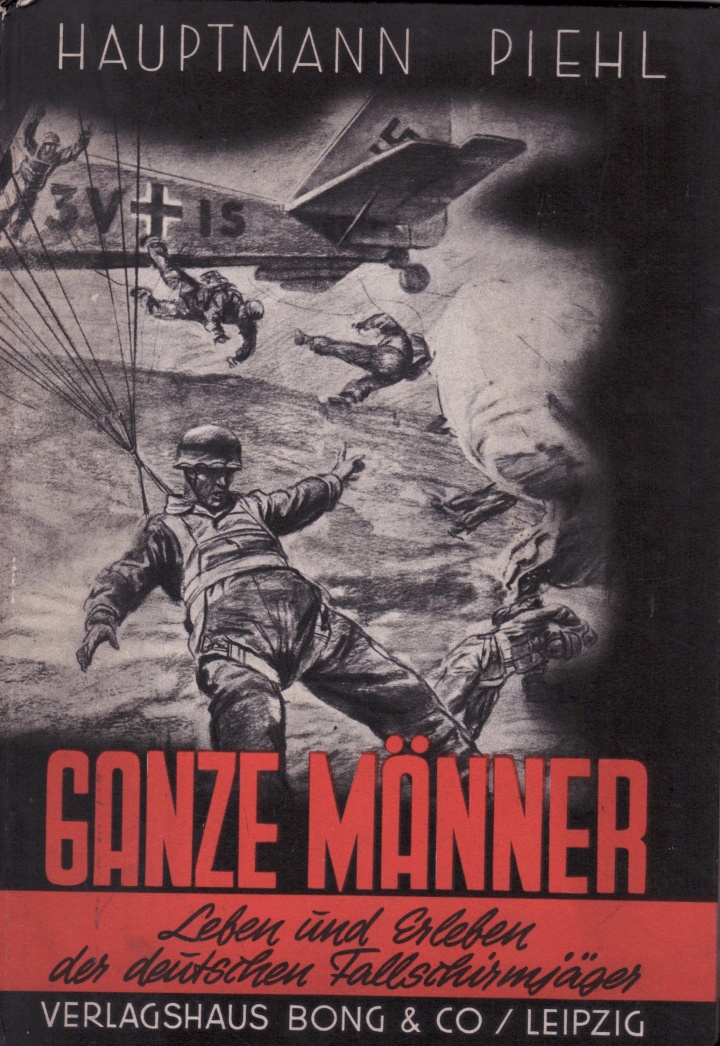 The front cover of Hauptmann Piehl’s Ganze Manner, the 1943 first edition, with a foreword by General Kurt Student. The German Fallschirmjager in WW2. 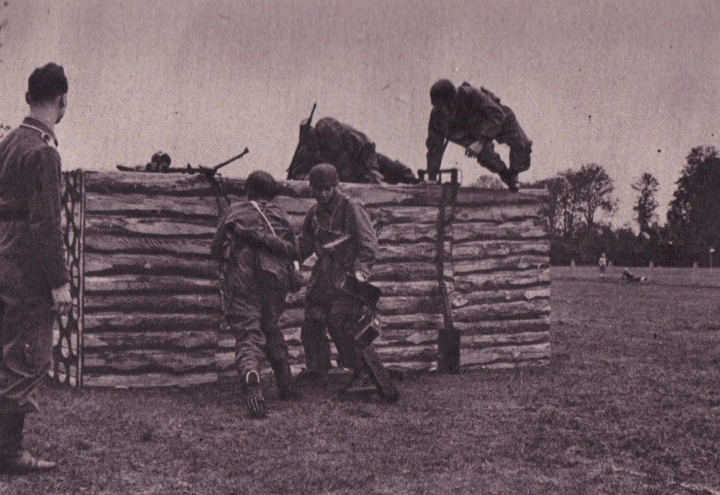 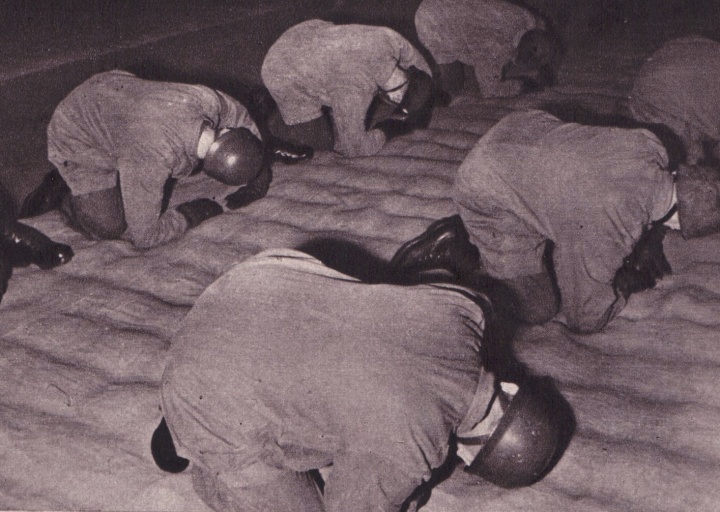 Practising rolls on a mat.

Putting on a show, jumping over ten of their fellow paratroopers.

Known as the ‘Wind Donkey’, it was used to blast air into their parachutes and force them to be dragged along the ground, helping them to learn how to quickly get onto their feet and collapse the chute.

Knee protectors and padding. They also wore cricket-pad like protection for their knees to absorb some of the force of the landing.

Number 1 pattern jump boots, reinforced, laced up the side. The later number 2 pattern, were laced up the front. 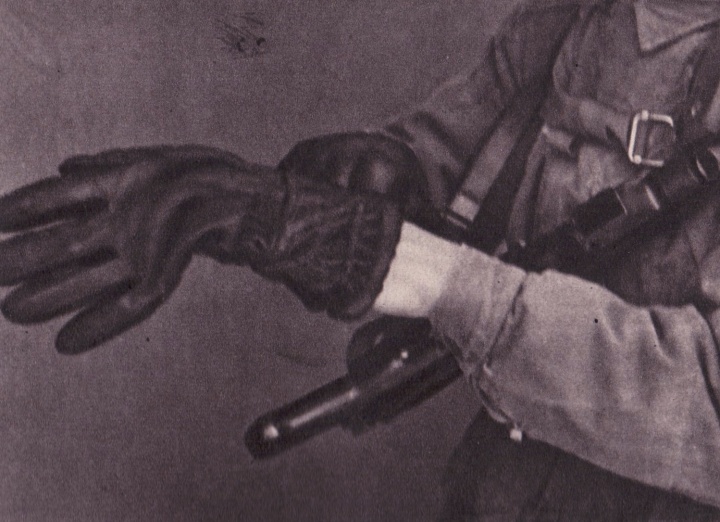 Thick, strong gloves to protect their hands on landing.

Parachutes ready for packing. The long parachute packing tables can be seen below.

The Fallschirmjager learnt how to pack their own parachutes.

Getting ready for their first jump.

The force of the wind is distorting the paratroopers face.

The Absezter, Jump Master, gives the order to jump. You can see by the static lines, some have already left the aircraft.

They were suspended by a single point from the centre of their back, making it difficult to manouevre the parachute. It also meant they had to land on their hands and knees, hence the knee pads and the gloves. As a consequence of this, they couldn’t parachute carrying their weapons and equipment, that followed them in canisters.

My very first jump back in the 80’s

The qualification phase to become a paratrooper consisted of 6 jumps. The first would be a t height of around 200 metres, the next two at 150 metres, but in a stick of six trainees. Their fourth jump would be from the same height, but at dusk or dawn and as part of a much larger stick, of perhaps 10 men. For the fifth jump they would be part of a Kette formation, a V-formation, a Chain of three Junkers JU-52. The final jump would be made under simulated combat conditions, up to nine aircraft flying at little over 125 metres in height.

The Fallschirmjager had ten commandments that they lived by as elite soldiers.

Number 1. You are the elite of the German Army. For you, combat shall be fulfillment. You shall seek it out and train yourself to stand any test.

General Kurt Student and his introduction to the book, Ganz Manner.

The next few posts will cover some of their major battles. 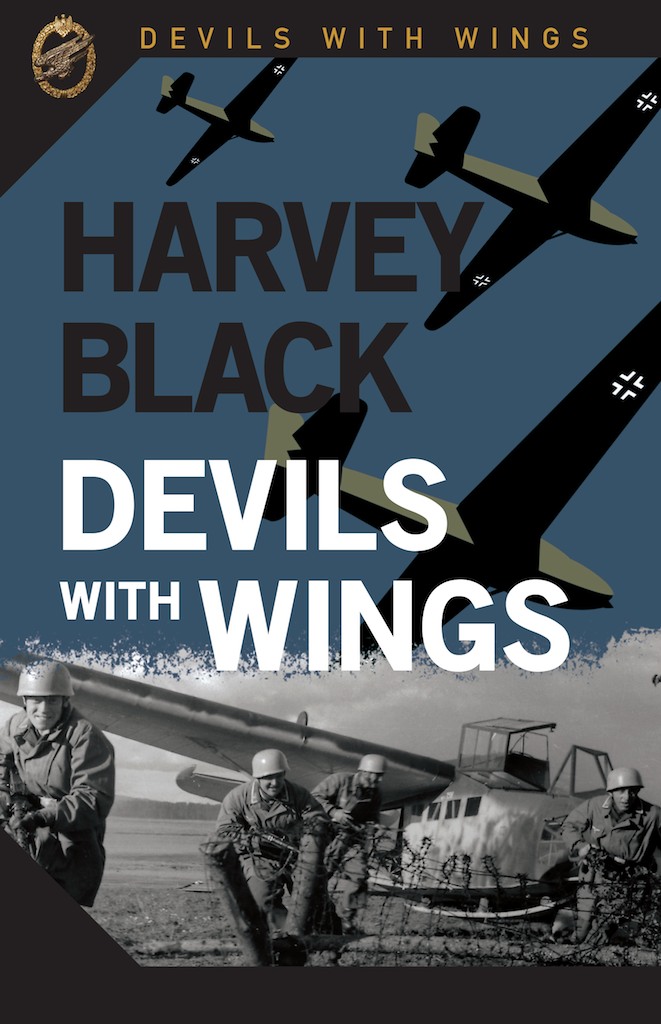 The assault on Fort Eben Emael

Blog is copyrighted to Harvey Black