General Manstein, one of the Wehrmacht’s top Generals. Part 1. 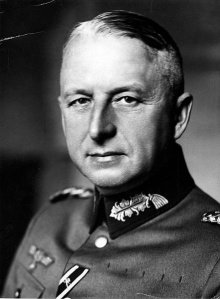 During the battles around southern Leningrad, in October and November 1941, in temperatures reaching -40 degrees, the 3rd Fallschirmjager Regiment, FJR3, 7th Flieger Division, commanded by General Student, was dispatched to defend parts of the River Neva and repulse any Russian attempts at creating a bridgehead. They were used in battalion sized units in a fire-fighting role and consequently some elements suffered up to 75% casualties.

This unit was just a small piece of the jigsaw of Army Group North’s push through the Balkans during Operation Barbarossa, launched by Hitler on Sunday, 22nd June, 1941.

General Manstein also had a key role to play in the invasion of Russia, taking command of LVI AK, LVI Army Corps, in February 1941, under the command of Panzer Group 4. He was assigned the 8th Panzer Division, 3rd Infantry Division (motorised) and the 290th Infantry Division and was ordered, along with Reinhardt of the XLI AK, to strike through the thinly held Russian defences and encircle the Russian 8th Army, before continuing their advance towards the Dvina River and force a crossing. The ultimate goal for Army Group North, was to destroy the Red Army holding the Baltic States, capture Leningrad and link up with the Finnish Army.

Manstein was born in Braunfels in Hesse, on the 24th November 1887, one of ten children. Although born to the Lewinski family, his father a Prussian artillery Generalleutnant, he was brought up by his mother’s sister, as they had no sons with whom to carry the Manstein name forward. Manstein was related to a number of famous Prussian Generals and naturally pursued a career in that same field. After completing his training and attending the Royal Military Academy at Schloss Engers, near Koblenz, he was attached, as a young officer, to the 3rd Garde-Regiment zu Fuss.

At the outbreak of World War 1, in August 1914, he initially served in Belgium before being transferred to the Russian Front in October, where, during the retreat from Warsaw, he was wounded and sent to Wiesbaden to recover.

After the war and under the terms of the Treaty of Versailles, where the size of the Army was limited to 100,000 men, much of his time was spent in an organisational role and it wasn’t until October 1921 that he got his first command, 6th Company, 5th Infantry Regiment. He was now married to Jutta von Loesch and his second child, a son, was born.

To overcome the restrictions placed upon the Army by the Treaty small study groups were created, leading to new doctrine in infantry, armour and motorised warfare. Manstein was fortunate to be included in one of these groups helping develop new military concepts.

Promoted to Major in 1928 and Oberstleutnant, Lieutenant Colonel, in 1931, he commanded II Jaeger battalion of the 4th Prussian Infantry Regiment in Kolberg. He was at Kolberg when Adolf Hitler became Reich Chancellor in January 1933, and along with the rest of the German Military, swore an oath, pledging their loyalty to him. His Wehrmacht service had begun…