Regardless of the fight along the border with Russia, the Ukrainian Defence Industry is still targeting overseas customers with a range of defence products. One of those is the Kvitnyk-E.

The Kvitnyk-E, laser guided projectile  (LGP) alongside a standard, smaller, (grey) 152mm round.

The Kvitnyk-E has been developed by the Progress Scientific Industrial Complex and has been specifically been designed to be fired from the 152mm towed and self-propelled artillery systems, the 2S3 and 2S19.

The LGP is not a replacement for the conventional 152mm high-explosive round, which is predominantly used for suppressive fire. The laser seeker is mounted in the nose with a fragmenation-type warhead along with 8kg of high-explosive.

Although the LGP was accepted into service with the Ukrainian Army in 2012, full scale production has not yet started. 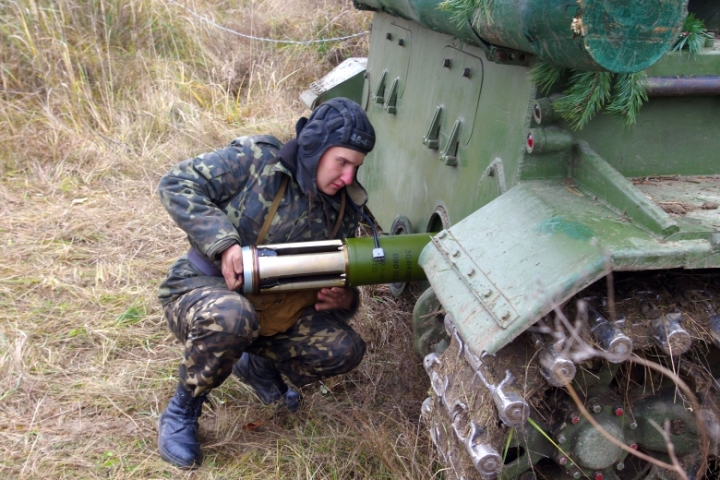 The Kvitnyk-E would primarily be used for high value targets, such as command posts, bridges, artillery rocket systems, tanks and IFVs. Once the LGP has been launched, four fins will unfold at the rear of the projectile and four control surfaces will unfold at the front.

The maximum range is expected to be in the region of 20,000 metres.

But, Ukrainian industry isn’t stopping just there. An LGP that can be fired from the more widely used Western artillery systems, such as the M109, a 155mm calibre weapon, is being marketed. Although this weapon does offer greater accuracy and target selectivity, careful coordination would be required between the weapons platform and the forward observer and designator. The FO would have to have line-of-sight of the target.