Russia’s renewal of its major surface ships continues with the building of a number of new classes. But Russia faces a challenge with the procurement of these new surface combatants.

The construction programme for Russia’s new surface fleet indicates that President Putin is planning a regeneration if his navy with fewer but more capable ships.

Russian surface ships have been more prominent in recent years, shadowing NATO naval operations in greater numbers. The return to the World stage, has resulted in a small number of ageing platforms conducting a large number of operations stretching their capabilities to the limit. The use of the Admiral Kuznetsov, and the technical issues surrounding it, a sea-going tug having to shadow the aircraft carrier, demonstrates the difficult journey they’re on.

The purpose of Russia’s navy, according to Russia’s maritime doctrine, is to establish and maintain conditions for the safe conduct of Russian maritime activities, to provide a naval presence (flying the flag), combatting piracy; and supporting International military, peacekeeping, and humanitarian operations, the surface ship being a core force element.

Russia’s Kalibr cruise missile is a land-attack cruise missile carried by Russia surface vessels. It is believed to have a range of between 1,500-2,500 km. A salvo of Kalibr missiles was launched from the Caspian Sea during late 2015, the target being ISIS forces inside Syria. 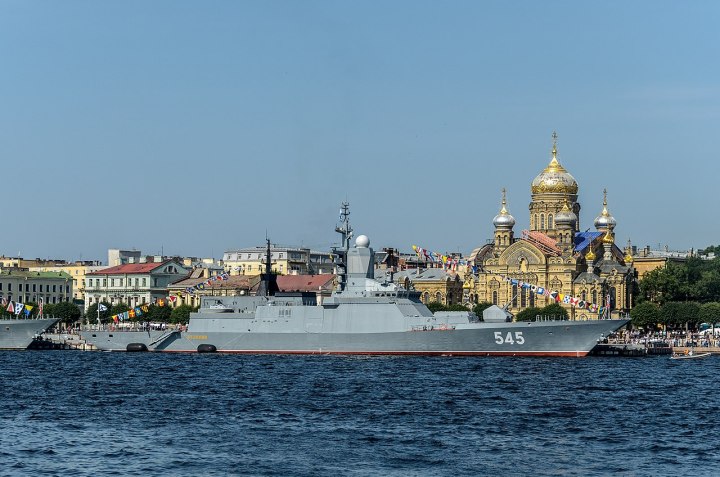 Model of a Derzkiy-class frigate. One building, nine planned.

Russia’s surface ship development now appears to be in line with the western trend of building fewer, but larger and more complex surface platforms. But they are finding this new approach costly and technically challenging.

Russia also appears to have a strategic focus on the artic region. Russian ships Admiral Essen and Admiral Gorshkov, have both conducted sea trials in the High North. Submarine-launched versions of Kalibr have also been tested in the region.