Skip to content
A qualified parachutist, Harvey served with British Army Intelligence for over ten years. His experience ranges from covert surveillance in Northern Ireland to operating in Communist East Berlin during the cold war, where he feared for his life after being dragged from his car and attacked by Russian KGB soldiers. Since then he has lived a more sedate life in the private sector as a Director for an International Company, but now enjoys the pleasures of writing. Harvey is married with four children. 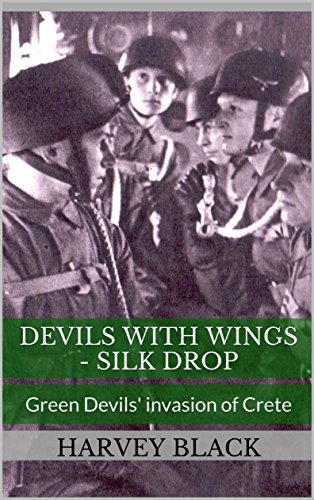 This exciting fictionalised retelling of the invasion of Crete is written by an author with extensive experience in army intelligence. It’s the follow up to Devils With Wings, and continues the wartime adventures of Fallschirmjager paratrooper Paul Brand and his Feldwebel Max Grun. On a high after their successful subjugation of Fort Eben Emael, Paul Brand, now in command of his own company, and Feldwebel Max Grun, are parachuted into Greece to help capture the bridge spanning the Corinth Canal. Tough times are ahead when the German High Command decide to invade the Island of Crete. This will be the first ever airborne invasion in military history. The Fallschirmjager, supported by the famous Gebirgsjager mountain troops, are up against 40,000 allied soldiers – who will fight to the bitter end to protect Crete. Operating behind enemy lines, Paul Brand and Max Grun will face challenges that not only tests their fortitude but strains the close bond between them. Silk Drop is a thrilling sequel to Devils With Wings and is based on a factual episode. 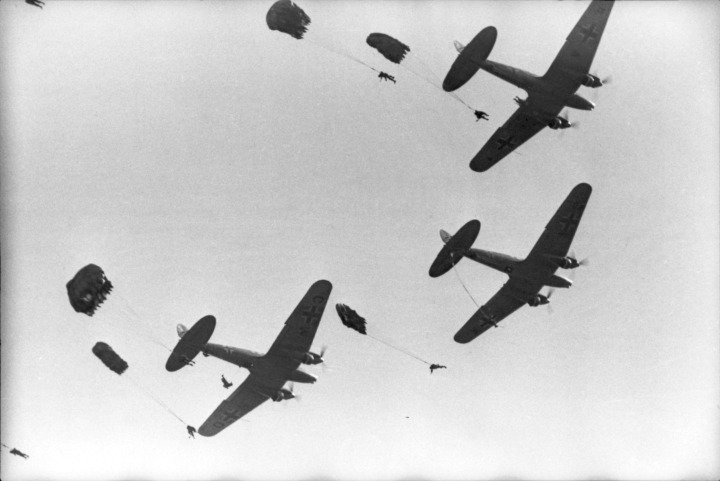 The battle of Crete, Operation Mercury, began on the morning of the 20th May, 1941. Greek and Allied forces defended the Island.

The Fallschirmjager, German Paratroopers, were used on a huge scale, the first ever mainly airborne invasion in history. 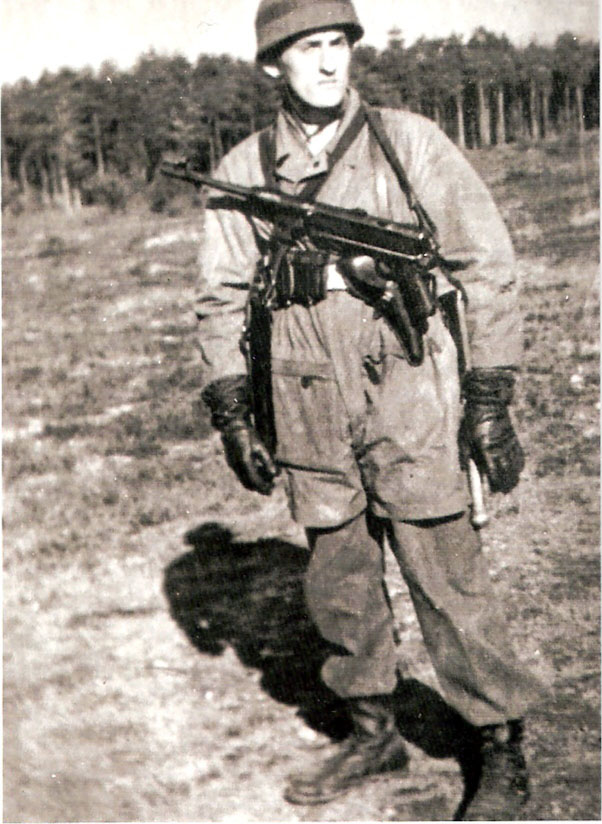 Up to 15,000 elite, Fallschirmjager initiated the attack by glider and parachute, later supported by up to 15,000 Gebirgsjager, Mountain Troops. Nearly five hundred transport aircraft were used, the famous Junkers JU 52, Tante Ju, Aunty June,  to the paratroopers.

Although a success, taking Crete in only 10 days, it was a Pyrrhic victory. Up to 7,000 were killed or wounded and over 350 aircraft were destroyed. They were never again used in large scale airborne operations, but as elite troops, they fought in every theatre of the war, by the River Neva near Leningrad, Monte Casino, Italy, Battle of the Bulge, Normandy and Africa.

A Video Clip of the Fallschirmjager

During 2010, I worked and lived in Poland. I took this as an opportunity to visit some of the great towns and cities of Poland, Including Wroclaw, Warsaw and Krakow. Krakow has to have been the most interesting. Not only is it a beautiful place, with a tremendous backdrop of mountains to the southwest.

But unfortunately there is a darker side to that area; 50 kilometres away is the home of the infamous concentration camp, Auschwitz.

It is not my intention to write the history of this notorious site, that has already been done, and by much better writers than me. I would just like to share some of my photography with you.

I am sure, had I visited the two sites in the middle of summer, with greenery, flowers and birds singing, the impact may have been different. But with snow on the ground and it being bitter cold, it was much easier to picture in your mind the atrocious conditions experienced by the people incarcerated there.

In his autobiography, Hoess points out that the expression meant  ‘work liberates one in a spiritual sense’, not that you will be free. To the Jews, it was later known as the ‘Death Factory”.

Auschwitz main camp, Camp I, the fences say it all.

Some of the main brick built camp buildings, an ex Polish Army Barracks. 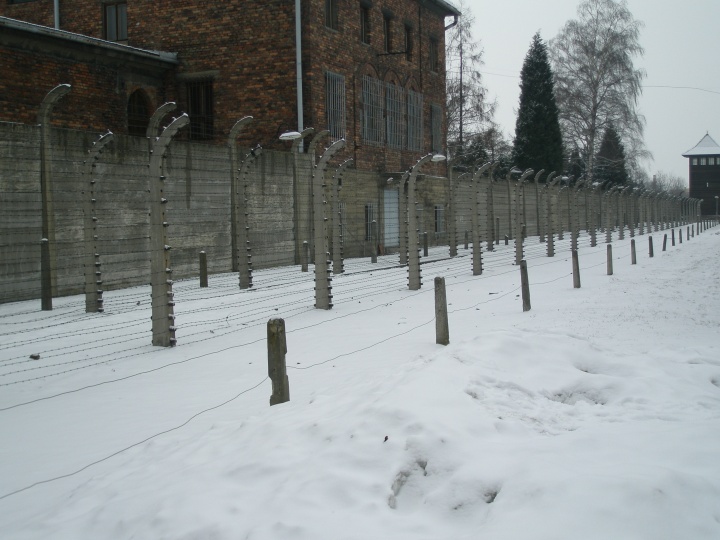 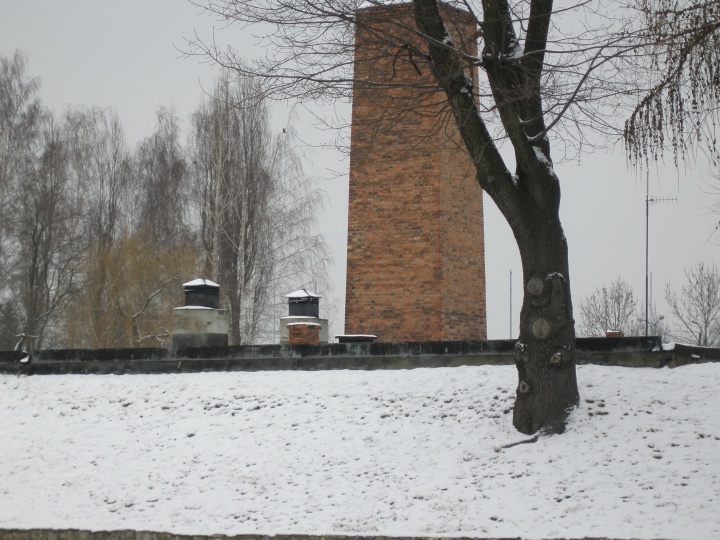 The roof of the gas chamber at Auschwitz main camp, the crematoria chimney in the background.

Looking into the camp through the barbed wire perimeter fence.

The Iconic picture of the entrance to Auschwitz-Birkenau. 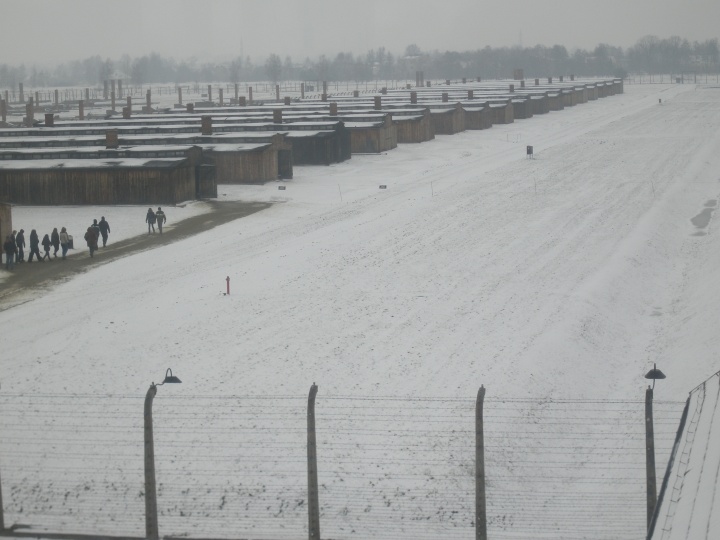 The view the guards would have had of the camp from the control tower at the top of the archway entrance. 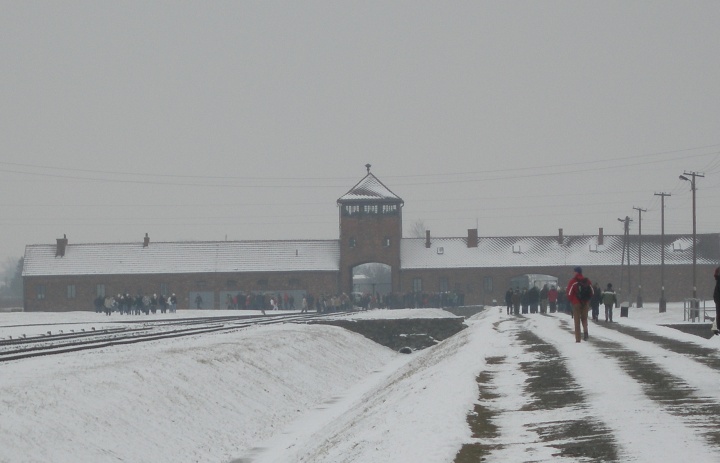 The view the camp prisoners would have got of the entrance to Auschwitz-Birkenau, as they were ordered off the cattle trucks to a fate they probably didn’t anticipate. 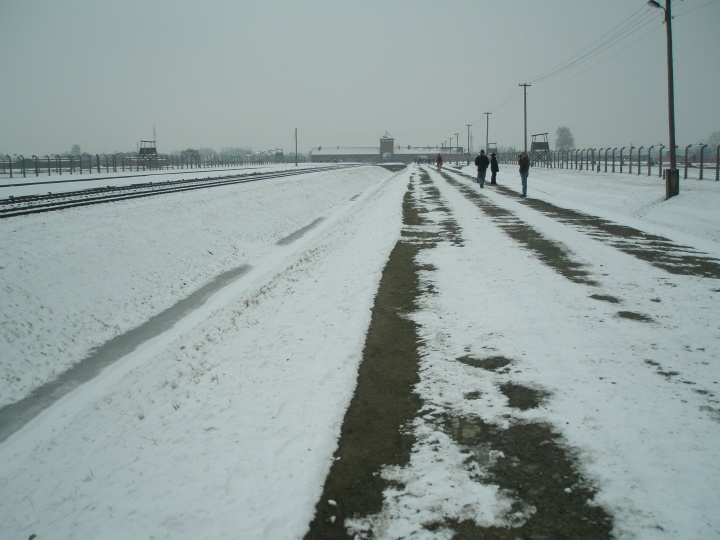 The long railway sidings where the dogs would have been barking, whistles blowing, guards screaming, families separated and children crying.

The reality of it all.

The site of some of the ruins of Auschwitz-Birkenau.

They had latrines, but not quite what we may be used to.

A view of the bunk beds, although I don’t think it depicts the true horror that was experienced within. As indicated at the beginning, my intention was just to share a few photographs with you and not do a write up on the background to the camp and the atrocities linked to it. It was a fascinating, yet horrific, time in our Worlds history and I sometimes wonder if all the lessons from it have been learnt.

A military thriller based around the adventures of two young Fallschirmjager paratroopers during the early part of World War II. It is a fictionalised adventure based on the famous assault on the impregnable Belgian Fortress, Eben Emael.

Tall, gangly Paul Brand is supported by his junior sergeant, Unterfeldwebel Max Grun, as he experiences his first action as a platoon commander in Poland, September 1939. The mutual respect between the two comrades grows as they experience the sights and smells of battle at close quarters.  Following their success in Poland, Paul, Max and the platoon are sent to a clandestine camp in the foothills of the Harz Mountains to train for a secret mission. Confined to camp for six months they undergo intensive training for their next mission – the subjugation of the Eben Emael Fortress.

Two German secret weapons will assist them to complete their task; the first is the glider, used for the first time to deposit troops directly onto a target, and the second secret weapon is a new Hollow Charge Weapon, capable of blasting through steel or concrete. On completion of their training, nine gliders containing seventy two Fallschirmjager land on top of the fortress, before the troops move in to the depths of the tunnels to finish the job. Over one thousand Belgian troops fail to stop them.

Effects of a Hohlladung, shaped charge, on an armoured turret.

This exciting fictionalised retelling of the assault on Eben Emael is written by an author with experience in army intelligence.

Buy the book from….

During the battles around southern Leningrad, in October and November 1941, in temperatures reaching -40 degrees, the 3rd Fallschirmjager Regiment, FJR3, 7th Flieger Division, commanded by General Student, was dispatched to defend parts of the River Neva and repulse any Russian attempts at creating a bridgehead. They were used in battalion-sized units in a fire-fighting role and consequently some elements suffered up to 75% casualties. The setting for my third novel, Devils with Wings: Frozen Sun

This unit was just a small piece of the jigsaw of Army Group North’s push through the Balkans during Operation Barbarossa, launched by Hitler on Sunday, 22nd June 1941.

With Operation Sea lion, the Invasion of Britain cancelled, Hitler’s eyes were already turning east. Manstein was to prove his worth yet again in one of the largest battles ever…

For the drive east, Operation Barbarossa, the subjugation of the Soviet Union, Manstein was put in command of a motorised corps, LVI AK (mot), assigned to Generaloberst Erich Hopner’s 4th Panzergruppe, part of Army Group North. He was assigned the 8th Panzer Division, 3rd Infantry Division (mot) and the 290th Infantry Division, a key problem being that one of his divisions would have to move by the age-old method of travel, by foot.

He received his instructions from Hopner and, along with General Reinhardt, was ordered to punch through the thinly held Russian defences, then, encircling any units on their way, particularly the Soviet 6th Army, secure crossings over the Dvina River.

In the early hours of the 22nd June 1941, Manstein struck at the army boundary between the Soviet 8th and 11th Armies, advancing over 40 miles in the first day. Although General Reinhardt’s XLI AK (mot) Corps, had been held up by a surprise attack from the Soviet 3rd Mechanised Corps around Raseiniai, Manstein continued his dash across Lithuania and made rapid progress down the Dvinsk highway. After an advance of nearly 200 hundred miles in less than 5 days, he secured the Dvinsk road and rail bridges across the River Dvina intact.

The drawback to this speedy advance meant that Manstein’s forces were well ahead of the rest of Army Group North and his Infantry were still two days away. Along with that, his lack of experience in commanding armoured units meant his advanced units were practically immobilised through lack of supplies, particularly fuel. He had used up to 100 tons of gasoline per day.

After an unsuccessful counterattack on Manstein’s bridgehead on the 28th June, by Soviet General-Major Lelyushenko’s 21st Mechanised Corps, Manstein’s Corps refuelled, the rest of Army Group North reached the Dvina River, and Manstein was again able to continue his advance, pursuing Lelyushenko’s retreat northeast, supported by the SS-Division ‘Totenkopf’, now attached to his Corps.

Although his advance proved sluggish, Reinhardt having much more success in his drive for Leningrad, his Corps eventually marched northeast towards Novgorod with his 8th Panzer Division in the lead.

In the meantime, Soviet General-Major Lazarev, gathered a force in the woods north of Soltsy, the 21st Tank Division and 70th Rifle Division, and three weaker rifle divisions south of Soltsy.  On the morning of the 15th July he struck, mounting a pincer attack behind 8th Panzer Division in an attempt to cut them off from the rest of their Corps, the German panzer division was soon surrounded.

Provided with limited supplies from the air, 8th Panzer Division was ordered to break out. After two days of fighting and incurring heavy casualties, they succeeded, but had to be withdrawn and switched to being a reserve unit while refitting.

In early August, Manstein, reinforced by two Infantry divisions, conducted a frontal action against the Soviet defences around Luga. Just as he was on the verge of linking up with Reinhardt’s enveloping Panzers the Soviets counterattacked again.

On the 12th August, the Soviet 11th and 34th Armies’ ten divisions attacked the three divisions of the German X AK, in Staraya, Russia. This was a major catastrophe for Army Group North. Manstein, on the 19th August, with his SS-Division ‘Totenkopf’ and 3rd Infantry Division, mounted a two-division pincer attack against Kachanov’s 34th Army to relieve the trapped Corps.

Manstein not only re-established communication with the encircled Army Corps, but encircled the elements of five Soviet divisions capturing up to 12,000 prisoners. The Soviet High Command considered the defeat so serious; Kachanov was executed for his failure.

Generalfieldmarschall Ritter von Leeb, commander of Army Group North, then attached Manstein’s Corp to 16th Army Corps to continue the push eastwards towards Demyansk. But, on the 12th September, very close to Demyansk, Manstein was given the command of 11th Army Corps in Army Group South. He left the next day to join his new command. The Crimea his next destination…